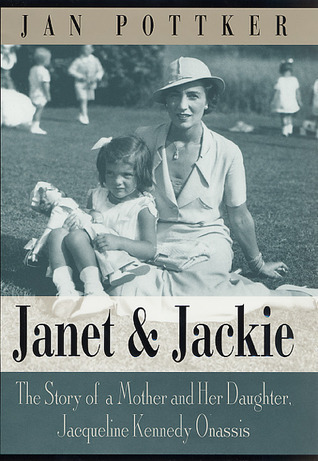 Janet and Jackie: The Story of A Mother and Her Daughter, Jacqueline Kennedy Onassis

Janet and Jackie: the first a private woman, and the latter a public woman. During her lifetime, we knew Jackie as Jackie Bouvier, Jackie Kennedy, and Jackie Onassis. As her life drew to a close, she acknowledged her legend and accepted the name that most people identified her with: Jackie Kennedy Onassis. Jackie's last names represented, of course, the men in her life. Each of these men – Jack Bouvier, Jack Kennedy, and Ari Onassis – influenced her and helped shape her personality. But each was with Jackie only briefly.

On the other hand, Jackie's mother, Janet – the greatest influence on Jackie, more important to her character than any of the men in her life who came and went – was there for a full sixty years, from Jackie's birth till Janet's death.

So, for sixty of the sixty-five years that would be allotted to Jackie, Janet Auchincloss was her daughter's permanent anchor and lifelong guiding spirit. Who was this woman, and how did she influence the woman who would define an era?

In the decades when Jackie grew up – the 1930s and 1940s – American parents dreamed of their daughter's becoming First Lady. They believed that to be the wife of the President of the United States was a noble and worthy goal. Only later – after cynicism about political leaders and more equal ambitions for girls and boys alike took hold – did they turn from this ideal.

If a mother's highest dream was to see her daughter on the Inaugural stand in front of the Capitol, then Janet achieved what others aspired to. By that measure, Janet's upbringing of Jackie was a success. No one questioned Rose Kennedy, after all, when she said that her greatest accomplishment was being the mother of the President. In fact, a survey of college historians rate Jack and Jackie Kennedy equally: of the Presidents and First Ladies, both Kennedys are ranked number eight. The only other couple held in equal esteem are Franklin and Eleanor Roosevelt, who come in at number one.

If Janet hadn't had the strength to walk out on a drunken, womanizing Jack Bouvier and take her daughters with her, their childhood would have been even more difficult than it was.

If Janet hadn't married Hugh D. Auchincloss Jr. – or a man like him – she never would have had the resources to raise Jackie as she wished. The expensive ceremonies, the debut, and the wedding reception at Hammersmith Farm were not so important to Jackie in themselves but were the pillars that supported the life she was brought up to lead. And if Janet hadn't raised Jackie to speak French fluently (it was the language spoken every night at dinner), enabling her to study at the Sorbonne and live abroad; if Janet hadn't nurtured in Jackie the strength and discipline it takes to become an excellent rider (Janet was a top-notch equestrian herself, winning the hunter championship three times at the National Horse Show); and if Janet hadn't encouraged Jackie to develop her writing, her drawing, her love of literature and the arts (even if Janet herself was not artistic or intellectual, she admired those traits in others) – then Jackie would not have caught the eye of a canny Joe Kennedy, who vetted the marital candidates for the son he had such ambitions for.

Moreover, if Jack Kennedy hadn't married Jackie, he arguably would not have become President. Although her appeal was interpreted (by mostly male reporters) as one of dress and style – she drew larger crowds than Jack from the start – she added to the campaign a substance that went largely unrecognized at the time. Her radio spots in Spanish, for instance, which drew tens of thousands of voters to her husband, are acknowledged as among the most effective political advertisements of all time.

Despite the hundreds of books, thousands of magazine articles, and myriad newspaper stories on Jackie, Janet's role in her achievements has gone unacknowledged. Does the aura of the Kennedy name shine so bright that anyone outside it is eclipsed? Janet seemed invisible during the White House years and after. There's a wire-service photo of a group of women watching Jack Kennedy's State of the Union Address. The ladies pictured are Janet, her daughters Jackie and Lee, and Joan Kennedy. The caption says, KENNEDY WOMEN IN FULL FORCE. In other photos – for example, at Caroline's graduation from Concord Academy – Janet posed for the cameras with Jackie, Caroline, John, and Ted Kennedy but was cropped out before the photo service sent the image over the wire. It is as if she didn't exist.

In fact, this writer, requesting a photo of Janet at the White House with Lady Bird Johnson at the 1965 commemoration of the Jacqueline Bouvier Kennedy Garden, was told by the LBJ Library audiovisual department, "Oh, so that's who that lady is with Mrs. Johnson! We never knew."

It's time to put to rest the old myths in which Janet plays a marginal role in Jackie's life. Is there any mother who could be reduced to such a small role – particularly the mother of one of the world's most celebrated women? The truth is that Jackie's greatest ongoing influence was Janet.

This is what Janet instilled in Jackie: charm and flirtation; reserve and privacy; manners and consideration; creativity and artistic endeavor; patriotism and hero-worship of military leaders; individuality and a strong sense of self; a passion for helping where it is needed; love of riding and horses; love of art; a belief that the finest things in life are necessities rather than luxuries; and, underpinning it all, the recognition that money is needed to support these undertakings.

Jackie, in turn, wanted to emulate and please her exacting mother. And Janet was there in times of crisis: whether Jackie was nearing the end of a troubled pregnancy and her husband was in Capri with his mistress or whether she needed her mother's tacit approval of her marriage to a Greek tycoon, Janet stood by her daughter – whatever her own doubts.

Janet was much misrepresented in the press. "The stories were really inaccurate," says Letitia Baldrige, Jackie's White House social secretary. Janet was made out to be some kind of wicked fairy godmother who made an occasional appearance only to cast a spell on the beautiful princess. The most common characterizations of Janet are "cold" and "social climber." Yet paradoxically, everyone who knew her – even her detractors – in the next breath speaks of her charm and warmth. As for social climbing, while she did get silly about her putative ancestry, using her maiden name Lee to claim a relationship to General Robert E. Lee when there was none, that is hardly an uncommon or heinous crime. In fact, Jackie did the same thing when she gave the impression that her background was French, even though she was actually mostly Irish.

And it is true that Janet would not have married Hugh D. Auchincloss if he had been a poor man. To be fair, however, she had no skills, only two years of college, and an alcoholic ex-husband whose younger brother had already died of acute alcohol poisoning. What would the future have held far her two young daughters if she hadn't married well? Janet did what she knew she had to for them as well as far herself.

She did it well. Her second husband, Hugh D. Auchincloss, loved her, and his friends accepted her immediately. Had Janet been a social climber. social Newport – seasonal home to the most prominent names in American high society – would have spotted her in an instant and rejected her. It's unjust to dismiss her as a mere climber just because she married a man with money, particularly given her own impressive grandfather and father, James Lee and James T. Lee.

Then, too, Janet handled her daughter's fame appropriately. She was there when needed – which was often – but she did not intrude. This very reserved woman, married to a man who "hated" publicity, managed to acclimate to her daughter's metamorphosis from a naive twenty-four-year-old bride to the country's most celebrated First Lady in a mere seven years. Not only did Janet adapt to the transformation, but she kept her balance as the more mannerly white-gloved society coverage of the First Lady still in force at the end of the Eisenhower administration gave way to the incessant tabloid culture that devoured her daughter with such a voracious and ruthless appetite.

Janet Lee Auchincloss was a remarkable woman who passed her unique traits on to her famous daughter. To understand Jackie, you must understand Janet.

Janet and Jackie: The Story of A Mother and Her Daughter, Jacqueline Kennedy Onassis
Sara and Eleanor: The Story of Sara Delano Roosevelt and Her Daughter-In-Law, Eleanor Roosevelt
Crisis in Candyland: Melting the Chocolate Shell of the Mars Family Empire
Born to Power: Heirs to America's Leading Businesses
Celebrity Washington
Dear Ann, Dear Abby: The Unauthorized Biography of Ann Landers and Abigail Van Buren